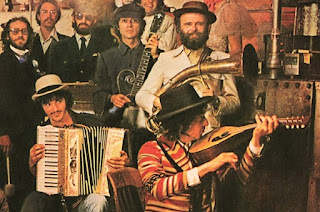 The 1975 official release of The Basement Tapes came with cover art featuring characters inhabiting the otherworldly terrain of the songs, including Dylan himself as a back country troubadour who claims he's a thousand years old.  The songs contain the echoes of a forgotten world, one existing outside the confines of history books.

Appropriately the album begins with "Odds and Ends", old time rock and roll channeling the Elvis of the Sun Sessions.  Elvis holds a high place in Dylan's universe and "Odds and Ends" is the perfect entry point into a world where fact and myth will intermingle.

While Dylan experimented with personas on previous records, on The Basement Tapes he seemed to inhabit characters.  On "Goin' to Acapulco" he sings in a higher voice register, expressing the quiet rage of a lapsed saint. While hundreds of songs were recorded, many of them stand out as Dylan's finest. "Goin' to Acapulco" being an example.


Alcohol's another recurring theme.  "Million Dollar Bash" imagines a surreal party offering a temporary escape from existence.  The drunken Chaplinesque narrator on "Please Mrs. Henry" embarks on one misadventure after another with no clear destination.

And so many songs about isolation.  "Too Much of Nothing" turns ennui into poetry, a realistic portrayal of the male psyche.  On "Clothes Line Saga" banality leads to social commentary and hilarity.

There's poignant songs on the human condition, some of the most striking in Dylan's catalog. "Tears of Rage" tears at the soul with the opening lyric "We carried you on our arms/On Independence Day/And now you'd throw us all aside." An epic story in those lines! Then the ballad climaxes into Greek tragedy with the final line "We're so low/And life is brief."  The Band's version with Richard Manuel's heartbreaking vocal transcends even the original.


A longing for redemption is another theme explored as Christian ideas and imagery find their way into many of the songs. "Open the Door, Homer" talks about healing the sick and ideas of forgiveness from the perspective of a lost pilgrim. Although "Sign on the Cross" did not appear on the official release (finally released on the 2014 official bootleg), the seven minute song suggests the possibility of salvation through faith, a message from another century.  The sentiment's anti-modern, yet powerful.

The final track, "This Wheel's on Fire," is very open to interpretation. I've heard everything from Dylan's motorcycle crash to the mismanagement of the Vietnam War. Whatever's going on is ominous, almost too terrifying to contemplate.

Ironically, The Basement Tapes are often considered an expression of American identity, yet all the musicians grew up from the remote corners of their civilization. Dylan was raised in a Jewish middle class family in Hibbing, Minnesota.  Four members of the The Band were Canadian, while Levon Helm, the lone American in The Band, was a native of Arkansas.

I'd argue the outsider/insider perspective on The Basement Tapes is one of the elements that makes them so special.  The homespun sound and sense of spontaneity in the music adds an authenticity, before that very concept become something of a cultural holy grail.

Neither Dylan nor The Band set out to invent a new genre of music and yet they did. The next part will examine some of the music they inspired.

Posted by Eric Gilliland at 9:15 PM