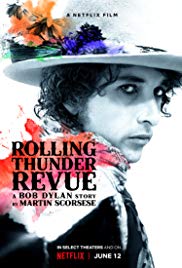 A spiritual sequel to Martin Scorsese's 2005 film on Bob Dylan No Direction Home, Rolling Thunder Revue follows Dylan on his tour of the East Coast during the fall of 1975. Dylan had been on hiatus from touring since 1966, but in 1974 he came back and toured for a few months with the Band. Those shows were played in large venues and are captured on the Before the Flood live album. The Rolling Thunder Revue would push against the arena rock scene of the 1970s. Spontaneity, variety, and theatricality would be the guiding lights. Besides being a great film featuring amazing music and performance, Rolling Thunder Revue is a stunning vision on the possibilities of art in a time fraught with cynicism and despair.

Scorsese's film mimics the carnival atmosphere of the tour. By piling on layers to the mythology, Scorsese jumbles truth, fiction, and reality together into pop art. A lot of the footage was also used in the Dylan's 1978 film Renaldo and Clara which starred himself and his then wife Sara - who's mysteriously absent in Rolling Thunder. If Renaldo and Clara, a four hour art film, attempted to tell a complex love story in the style of a Dylan song like "Visions of Johanna", Rolling Thunder takes an alternate approach, inviting the audience into the party. The cipher Dylan of Renaldo is reconstituted into a new identity, a swashbuckling troubadour from either an idyllic past or a dystopic future. He's also the man who drives the bus. 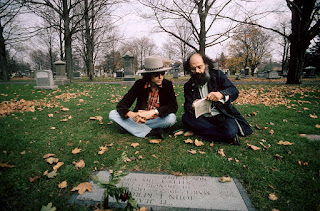 Literary allusions populate the film. Allen Ginsberg, a founder of the Beat Movement, joined the tour as a Socrates watching his student overtake the teacher. Dylan and Ginsberg visit the grave of Jack Kerouac in Lowell, Massachusetts. While the symbolism of the scene may appear a little too on the nose, it was all in the spirit of the Revue. Excursions into kitsch America like the Mayflower Museum or Niagara Falls were done with same sentiment - taking in the entirety of the experience. The Revue evokes On the Road, but also the showbiz savvy of a Bob Hope or Freddie Blassie.

The band Dylan assembled gave the tour a unique sound and style. Some had a history of within Dylan's orbit like Joan Baez, Bob Neuwirth, and Ramblin' Jack Elliot. Dylan infamously jilted Baez on camera in the 1967 documentary Don't Look Back, but they appear to have mended their relationship here. Others ended in the tour through happenstance. Dylan spotted violinist Scarlet Rivera on the street and invited her to come along. Patti Smith appears at a key moment, sort of providing the overture. Larry "Ratso" Sloman provides comic relief as the sycophantic Rolling Stone reporter.

Robert Altman's Nashville would make a perfect double bill with Rolling Thunder. Released in 1975, Nashville is a panoramic view of America in the mid 1970s, specifically the country music scene as the Bicentennial beckoned. Ronee Blakely starred in the film and was also part of the Revue. Clearly Scorsese is paying tribute to Altman with all the references to his unverse in Rolling Thunder.

Rolling Thunder treads the line between being a cinematic Rube Goldberg machine and a poignant statement on art and politics in America then and now. Dylan remains as enigmatic as ever in his interview, shedding another layer of skin to reference his 1983 song "Jokerman" as he downplays the importance of the Revue. The film challenges anyone who watches not to be moved by the words and by the rock and roll. Music is the instrument to take on everything from corrosive power structures to the conflicts of the human heart. "Hurricane" and "The Lonesome Death of Hattie Carroll" are achingly relevant, targeting the systems of injustice. The personal songs "Simple Twist of Fate" and "Tangled Up In Blue" project into the universal. 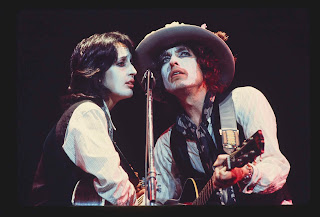 Dylan rearranged his material from the Sixties into anthemic rock and roll, "A Hard Rain's A-Gonna-Fall" gets reworked into a fever dream vision; "Isis" a hallucinatory journey into  a land of pyramids of ice. Dylan's duets with Baez recaptured the spirit of the folk revival of the early Sixties. In a showstopping scene, Joni Mitchell performs a spellbinding version of "Coyote" with Dylan supporting her on guitar. Songs from the 1975 record Blood on the Tracks, also took on a new life through live performance. The energy from the Revue led to the recording of Desire, another classic album in the Dylan canon.

Narrative shenanigans aside, Rolling Thunder Revue points the way to new possibilities. In terms of profit the tour was not a success, while the second leg of the tour in 1976 played bigger venues, but excess and exhaustion set in. For a brief moment the possibilities and the ideal were in harmony - that's the magic the Rolling Thunder manages to conjure.

Posted by Eric Gilliland at 4:09 PM